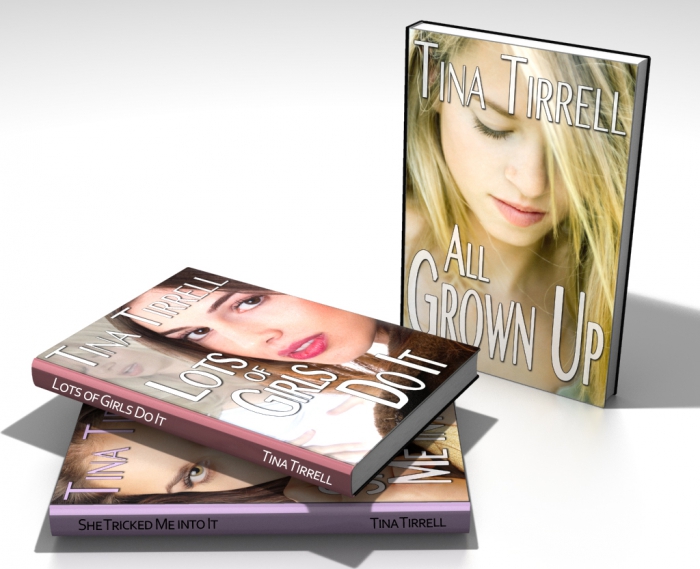 Oh, It Hurts! Pain and Pleasures of Growing Up Too Fast

Box set featuring All Grown Up, Lots of Girls Do It, She Tricked Me into It

They Say Growing Up Is Hard to Do, but They Never Said It Would Be So Much Fun!

They Say Growing Up Is Hard to Do, but They Never Said It Would Be So Much Fun!

Lots of Girls Do It

As the plot of her revenge plan unfolds, Johnny is played by his own male ego and desire and the gift of enjoying every man's ultimate fantasy. Under the bleachers, Sarah gives him a revealing, girl-girl display he'll never forget, and which gives her best friend a new and improved reputation at school.

She Tricked Me into It

The aggravation and tension of sibling rivalry explode in the most pleasurable way.

He doesn't want to learn; Lauren can't possibly have anything good to teach him—or show him. But when she takes it upon herself to force a lesson on female upper anatomy, he can't help his bodily reaction. And Lauren, of course, knows just how to deal with that too. It may just be all a big game to her, but he is the ultimate winner.

Lucky for Susan, John's more than happy to help with her intimate request and offers himself as a patient tutor in the ways and methods of college extracurricular activities. Just inside John's old room, Susan eagerly learns one technique that's surprisingly just like licking a lollipop. She eats up her first lesson with the unmatched exuberance of a student quick to learn and has yet more to look forward to.

Experience It All Over Again... Just Like the First Time

“Not really.” My nose scrunched up the way it does when I’m caught lying. I can’t help it. I know I’m going to be told my punishment next.

But John didn’t even get mad at me. “That’s all right. What can I really help you with?” I knew when he put his hand on my knee that he actually did care. I thought I’d start practicing to be an adult by telling the truth.

“Well, I heard you talking on the phone, and honestly, I’m scared about going to college next fall. I don’t know what to expect. I don’t want the guys to think I’m just a dumb girl.” I realized I was making a pouting face, the one that always made Dad so mad he told me to wipe it off.

I could tell John was listening though. The way his eyebrows bunched up together made him look so sexy. I was beginning to see what made men different from boys. They took you seriously. “Well then, what will make you feel more confident? I’ll help you with anything you want to learn.”

I couldn’t help looking down at the bulge in his crotch. It was automatic. I hoped the blush on my cheeks would make him realize I really was a good girl and didn’t go around thinking about sex all the time. “Well.” I didn’t know if I was doing the right thing by saying something I’d only said out loud to Jessie before. “I heard that guys really like it when girls go down on them.”

“Well, I really don’t know what to do.” John patted my knee with his hand and let it rest on my suntanned thigh. I hoped he wouldn’t notice the little blonde hairs there from not shaving in a while.

“That’s okay. You can’t be expected to learn all on your own. It’s quite easy. And I know most women really like it.” His hand moved just a bit so his fingertips brushed my inner thigh. Tingles spread all the way up my body, and I had to catch my breath. “Would you like me to show you, Susan?”

He was so kind and understanding that I wanted to impress him and show him I wasn’t shy. I looked down at his bulge again and nodded. I needed to know what was hidden down there in that most private spot, how he was different from the boys who flashed themselves at me without even being asked.

I got down on the carpet in front of him and balanced on my knees. I heard John start to breathe deeper as I slowly unzipped his khaki pants, careful not to hurt him. He had cotton boxers on, and I pulled him out of the hole in the front so I could take a good look at what made him a man. I couldn’t believe how stiff it was in my hands.  It was silky smooth but hard as a rock.

“Oh, that’s perfect, Susan. You’re doing great. But don’t be afraid of hurting me. A man’s cock is built for rough play.” I smiled back at him and then concentrated again on my task, picking up his snake with both hands and holding it tightly as I waited for instructions. I couldn’t help squeezing it a bit to see just how hard it was.

“Now, leave one hand there at the base and put your other hand above it so you can move it up and down. Go ahead and put it in your mouth if you want. Just like a lollipop.”

It kind of looked like a lollipop too. The end was dark purple just like grape-flavored candy and even a bit shiny. I took out my chewing gum and stuck it on the bedpost. Then, I slowly lowered my head and touched my lips gently to the very end. So warm. It moved a little bit, like it was a living thing that wanted to be petted. I pulled it inside my mouth and sucked on it like a popsicle.  .... 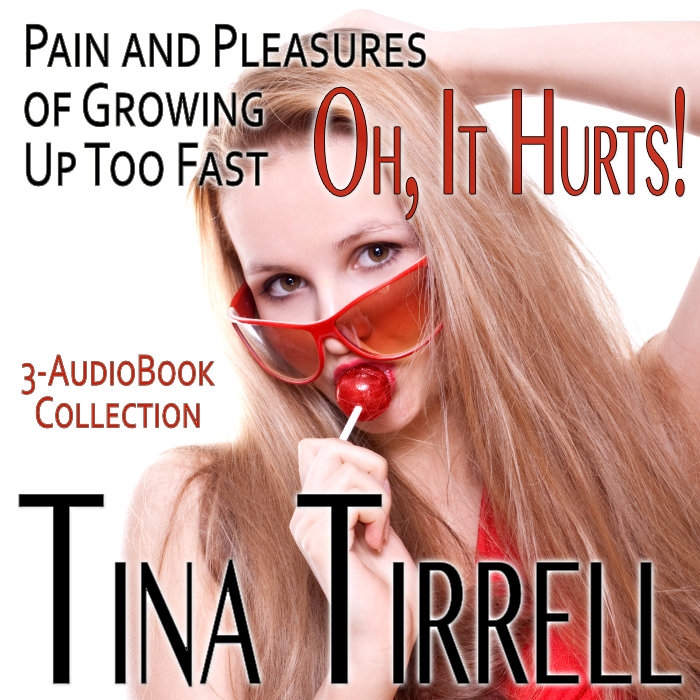 1) "Lots of Girls Do It": Tina Tirrell takes a break from the MILFs and wades into lesbian erotica, though it's actually bi-curious, as our flat-chested narrator insists that she wants a boyfriend. But in the event, the action is all girl-on-girl. We're often attracted to what we're not, what we as individuals don't have. We need that yang to cozy up to our yin. Male and female, for example. Or, if the genders are the same, and if that gender is female, perhaps it's diametrically opposed chest size. Such is the gentle set-up in this excellent high school story by Ms. Tirrell. Our heroine, now 18 and a senior in high school, was harshly denied by genetics. She recalls how, earlier in the 8th grade, she saw all of her fellow girls develop as if they "had gone to breast camp over the summer". Nothing for our poor narrator. There's a lot of detail about the feminine life and its particular agonies here, especially as they're experienced during adolescence. In high school all we ever want is to be like everyone else. One of the markers of growing up is when you stop wanting to be like everyone else and start feeling comfortable -- in this case, *really* comfortable -- in your own skin. Tina Tirrell takes us back to that time, and those feelings, with this splendidly written story.

2) "She Tricked Me Into It": It's an absolute delight. The prose zips along: the writer is clearly on fire. Descriptions of family life always seem to bring out the most vivid characterization from writers, and Ms. Tirrell is no exception. She gives us a mini-Brady-Bunch scenario here: a young man and his father, who has married a woman with a daughter. The daughter is older than the young man. "Evil Lauren" -- the most annoying stepsister imaginable. She looks at your crush's Facebook page -- the horror. :) She beats you to the shower -- "Too slow, Joe!" -- and burns out the water heater before it's your turn. I found her deeply attractive and wonderful, full of sass, spirit, and boldness. Well, our unnamed male narrator catches her nekkid in the shower ... and his education begins. Ms. Tirrell furnishes a nice plot where Lauren, having noticed that her lovelorn brother is mooning over a girl's Facebook page, decides to become the young man's teacher, preparing him for whatever delights "Haley" might have in store for him. One can feel as one reads that this story was lovingly written. It has the tang of real life to it. As for the erotic part, Ms. Tirrell pulls out a dandy -- listen to this description of the aftermath: "It was like being empty and all filled up at the same time. Like being totally tired but full of energy. I still couldn't move." Nice, Tina, very nice. :) And I'm not the only one smitten with "Evil Lauren". Our narrator concludes, "... my incredible sister, the very *best* sister any boy could hope for."

3) "All Grown Up": Straight-up erotica from Tina Tirrell. Ms. Tirrell is particularly gifted at describing complicated physical scenarios: the scene in “John’s” car is a textbook example of carefully prepping a physical interaction and building the scene brick by brick as it goes forward. Oh, and it should be noted that the description of our heroine getting orally pleasured by the guy is hot! -- the details are ripe and exact. One can smell the perfume and taste the salt. This is the 19th or 20th story of hers that I’ve read, and in this one, another Tirrell Trope emerges: the Lollipop Metaphor. “Go ahead and put it in your mouth,” Susan’s lover instructs her, “just like a lollipop.” Tirrell’s heroine goes on to narrate, “It kind of looked like a lollipop, too. The end was purple, just like grape-flavored candy.” (LOL, Tina!) I call it a trope because in another story of hers, “The Big Tease”, Ms. Tirrell makes a comparison to a lollipop licking CONTEST. Where the heck was I when this was going down? Ms. Tirrell has disabused me of the notion that I had an exciting youth. Sigh. Anyway, Ms. Tirrell’s prose is peppered with similarly piquant details, not just in this story, but in all her work.

To conclude: these three stories are among Ms. Tirrell's "realistic" group of fictions. She also writes in various other sub-genres in the wide realm of erotica, everything from giantess fiction, gender-swapping, and more. But a writer must prove herself with realistic, day-to-day, this-could-happen fiction. A writer must prove that she can create a world we recognize, populate it with people we know, give those people an interesting story to live out, and finally be empathetic to such "real" people and their stories. Done.

5 out of 5. This collection proves Tina Tirrell to be among the very best in her field.

I can't figure out which book is my favorite.  I didn't even realize how much a turn-on that taboo theme can be!  I'm aching all over, and I'm not even sure why.  I just know that I have to have more!

Give me more! I am loving these bundled book collections.  I can't believe I haven't discovered these gems in Tina Tirrell's catalog before!