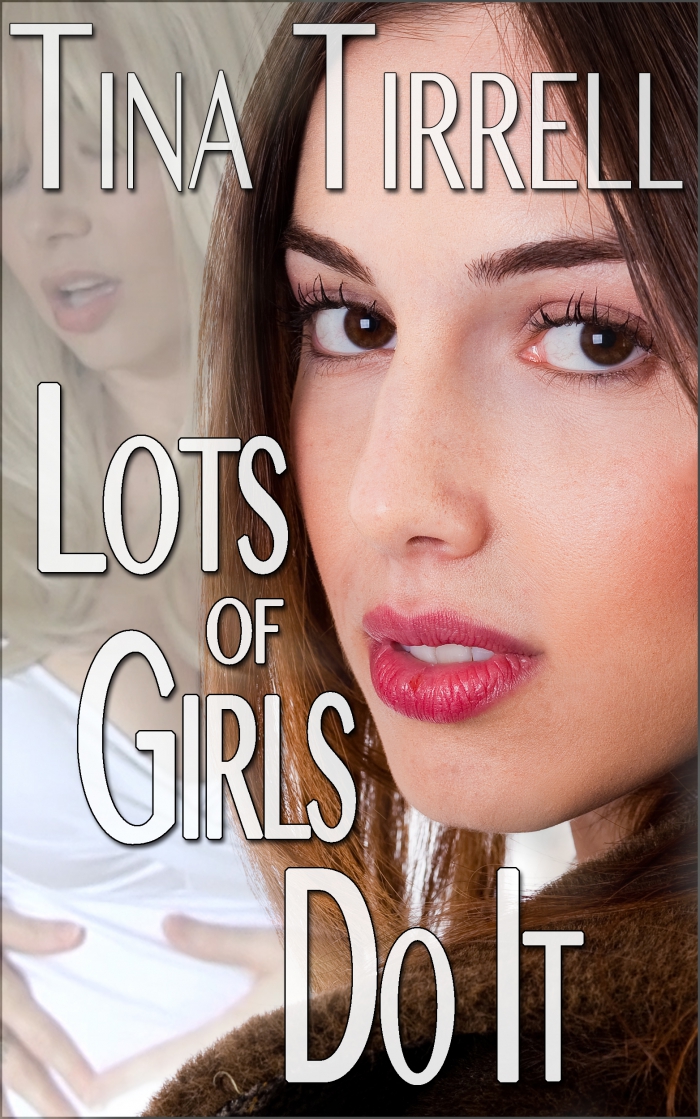 Lots of Girls Do It

Featured in box set Oh, It Hurts! Pain and Pleasures of Growing Up Too Fast

Being envious of the other girls' early development is bad enough for a high school senior who's eighteen and still left behind the growth curve, but being the ridicule of the school is something she thinks she'll never live down—until she meets Sarah Breville, the new girl at school who's endowed in the way other girls only dream of.

Sarah is everything this shy, ashamed student wishes to be and is soon to benefit from in surprising—and very sexy—ways. Sarah is beautiful, buxom, confident, and surprisingly forward... especially in her own fondness for other girls. The two are destined to become best friends, and one afternoon of shared study time proves it. When her new friend admits embarrassment for lacking where Sarah is so bountifully blessed—and how she's the brunt of relentless teasing, all due to a past encounter with her arch enemy, Johnny Carter—Sarah invites her flat-chested friend to experience the very womanly attributes she's become undeniably obsessed with—in a private show and permission to touch.

Unbeknownst to her all-the-more-enamored best friend, Sarah begins to contrive a way to take revenge on Johnny on her behalf. As the plot of her revenge plan unfolds, Johnny is hit in just the way it hurts most. He's played by his own male ego and desire and the gift of enjoying every man's ultimate fantasy. Under the bleachers, Sarah gives him a revealing, girl-girl display he'll never forget, and which gives her best friend a new and improved reputation at school.

....  Sarah Breville was blessed with having the biggest breasts in school.  I wondered if she used to wander around her beach town back home in one of those string bikini tops and cut off jean shorts.  And if she did, how in the world did such a tiny top hold up such amazing tits?  That's what she had: real tits.  Supermodel-perky big perfect, heavy-looking breasts.  And she never wore a bra.  She didn't have to.  She didn't need anything to hold those things up, but it really should've been illegal to walk around the halls our senior year with the biggest breasts in school and not put just one extra layer of clothes between those tits and all the boys' eyes staring at them.

It wasn't just the boys.  It was the full-grown male teachers too.  She had everyone's attention.  Even mine.

I mean, just picture our tits side by side.  Every day, we'd sit in chemistry class right next to each other, the tan blonde and the pale brunette.  I was completely flat-chested, except for having those tiny puffs of soft skin trying to be breasts and those pencil eraser nipples by then.  I didn't know whether I should be proud of my nipples and show them off in the thinnest shirts possible or hide them.  They were like hard red beacons screaming to the world that I didn't have breasts to go with them.  For all I knew, they were the closest thing to breasts I'd ever have.

So, yes, there were my nip-tits and Sarah's giant mounds, complete with actual cleavage.  I looked shorter than her just by sitting beside her and even though we were actually the same height.  That's what a great pair of tits can do for a girl, I guess.  I just couldn't help staring at them.

They were all smooth looking: the tops of them that were sticking out of the neckline of her shirt.  Not a freckle in sight.  And I thought that, if I got closer, I would actually fall into her cleavage and die of suffocation.  And when that thought first crossed my mind, I was completely surprised when I realized I wouldn't mind going that way.  How can a girl's breasts be so amazing that another girl actually starts falling for them?

Yes, it was in Mr. Hendricks's chemistry class that I found myself falling in love with another girl's tits.  Can you blame me?

I knew I didn't like girls.  I really, really wanted a boyfriend.  And I never had the hots for breasts.  But I'd never seen anything like Sarah's before, and they totally changed my life.

I guess you could say I became obsessed with them.  Every day, I would look so forward to chemistry class.  I'd say "hi" to Sarah and she'd politely say "hello" back.  I'd make sure I never did anything to annoy her.  I kept all my stuff on my side of the table as if there was an invisible line right down the middle of it.  I tried to sit still and not make too much noise, and I'd study ahead in the textbook to make sure I knew all about the next day's lab project so I never slowed down our work together.  And I loved every chance I got to stare at Sarah's perfect breasts.

I stared at them so much that I started to recognize my favorite shirts of hers, the ones that her tits looked best in.  I have no idea if the guys in school would agree with me, but I knew what she'd wear that made me feel, well, extra happy.  It was the day she was wearing a pink blouse with tiny ruffles around the neckline that she asked me if I would come over to her house after school to help her understand that day's lab assignment.  Of course, I said I would.  .... 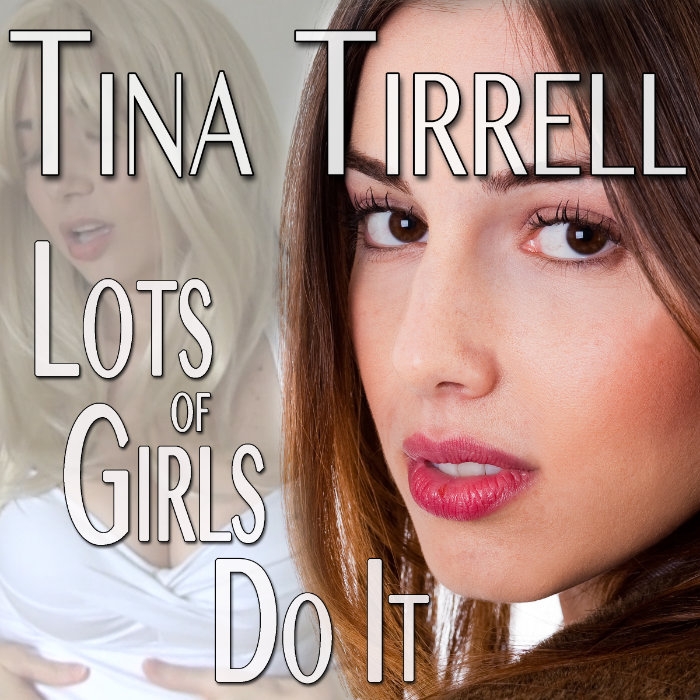 Tina Tirrell takes a break from the MILFs and wades into lesbian erotica, though it's actually bi-curious, as our flat-chested narrator insists that she wants a boyfriend. But in the event, the action is all girl-on-girl.

We're often attracted to what we're not, what we as individuals don't have. We need that yang to cozy up to our yin. Male and female, for example. Or, if the genders are the same, and if that gender is female, perhaps it's diametrically opposed chest size. Such is the gentle set-up in this excellent high school story by Ms. Tirrell. Our heroine, now 18 and a senior in high school, was harshly denied by genetics. She recalls how, earlier in the 8th grade, she saw all of her fellow girls develop as if they "had gone to breast camp over the summer". Nothing for our poor narrator.

The narrator then describes an agonizing tale of a stuffed training bra -- stuffed with tissues and olives (!) -- that snaps on her, causing the stuffing to come out. One little jerk who had been impressed with her presumed physical form turns on her viciously, for he feels he's been made a fool. Our heroine, meanwhile, dies inside.

The years trudge by. In the depths of her despair, she becomes infatuated with a big-chested angel from California whom even the teachers can't stop staring at. As seniors, they share a lab class together, and the heroine sort of falls in love with "Sarah's" assets, perhaps out of simple envy, if for no other reason. But Sarah -- a light sketch, but believable as a young woman who knows she has everything and doesn't feel a particular need to be arrogant about it -- is kind to her, and they form a bond. And with that bond, they get a little erotic revenge on the creep who has mocked the heroine for years.

There's a lot of detail about the feminine life and its particular agonies here, especially as they're experienced during adolescence. In high school all we ever want is to be like everyone else. One of markers of growing up is when you stop wanting to be like everyone else and start feeling comfortable -- in this case, *really* comfortable -- in your own skin. Tina Tirrell takes us back to that time, and those feelings, with this splendidly written story.

5 out of 5. Highly recommended.

This book carries the theme of girly, first-time exploration very well... very true to life and sensual. At the same time, it's humorous. I love the main female character's general attitude, her naivety and innocence. She's vulnerable, but headstrong, and not at all leery about admitting to herself that she's attracted to her best friend at school... even if just with the focal point of her friend's "upper anatomy"!

The author's on to something here. She's got a real knack for showing the "mature" side of innocent characters, for emphasizing the end of that innocence in a very natural way.

I would definitely read more of her titles. Great fodder for my own evolving understanding of the sensual realm.

I love those "naughtier" subjects, and when I heard of Tina Tirrell's's debut on the virtual shelves of erotica, I had to take a peek. I write so much that I usually forget to read what's hot, but one area that I haven't played around in much myself is in that "just of age" genre. And don't we ALL want to relive our youth! :)

I fell for Tina Tirrell's Lots of Girls Do It as soon as the main character was introduced with her mousy/nerdy attitude and her own unique attraction. She's sweet, innocent, and just plain curious... and I wanted all her dreams to come true! For the time I spent reading this book, I WAS the main character, feeling all her desires and wanting to explore... her pretty best friend. :) And wow, did I get what I wished for!

You have to know one thing right now, before you decide to buy this book. This is NOT just for male readers. This is just plain hot. Tina has now prompted me with a few of my own new ideas for stories and... my fingers are now crossed in hopes of "working" with her in the future on a "collaborative project." ;)!

Seriously, this book does NOT need a review.  Or, actually, it should have thousands of 5-star reviews.  If you haven't read this yet, there's something wrong with you.  Have you SEEN the title?!?  It grabbed me (and so did Tina Tirrell's author bio photo), and I ended up reading it all in one go.  I couldn't put the thing down.  I mean, a GIRL writing about  GIRLS envious of one another's "bra sizes?"  Holy cow!  If I didn't know better, I'd assume Tina must be a man writing under a woman's name; she seriously knows what we men cook up in our imaginations and WANT to read.  If you haven't figured it out already, this is the kind of book you pick up when you're in the mood for a little "assistance."  And if you're a female reader with a bit of bi-curiosity yourself, I imagine you'd like this book too.  It's subtle, hot, very realistic, and the language is all wrapped up in the youth and innocence of the theme; it will drive you WILD.

Tina Tirrell's books just keep getting hotter.  And they're so crazy hot to begin with!  It's all I can do to contain myself while reading them.  Maybe I shouldn't read them on my phone during meetings!  Ha!  Tina, please keep writing these tales of young girls with so much enthusiasm and that sexy exploratory nature.  As fast as you can!