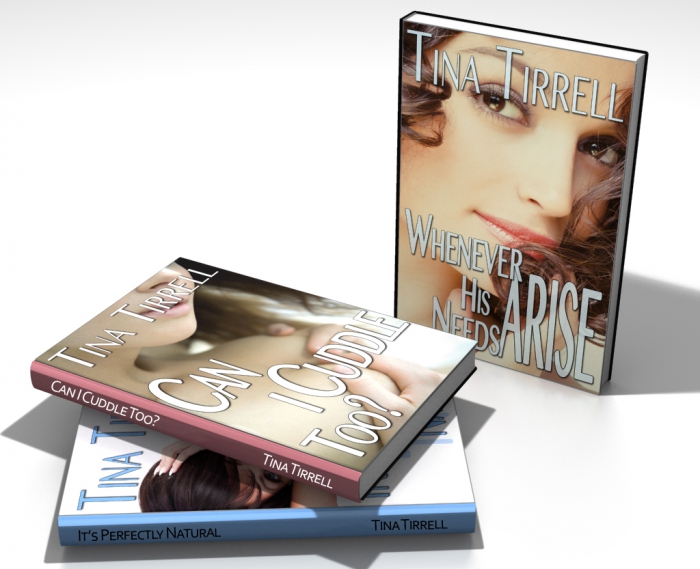 Box set featuring Can I Cuddle Too?, It's Perfectly Natural, Whenever His Needs Arise

A Dirty Diary Never Lies, and No One Nurtures First-Time Sexual Experiences Better than a Woman Devoted to Delivering Unconditional Love.

A Dirty Diary Never Lies, and No One Nurtures First-Time Sexual Experiences Better than a Woman Devoted to Delivering Unconditional Love.

Whenever His Needs Arise

The sudden arising of an extraordinary situation necessitates the most immediate and taboo handling.

Only one person can come to his rescue and relieve Tommy's great burden, taking care of his most urgent needs: the one responsible for caring for him and best equipped for emptying and being a receptacle for his overproducing anatomy.

Can I Cuddle Too?

Caught in the act of intimacy with her new husband, she cannot possibly guess how much damage the scene will cause to an impressionable young mind or how she'll be forced to address it.

David just wants to love her and be loved in return. And when her explanations and gentle corrections go ignored, there's only one way to deal with his growing need and hardening difficulty at comprehension. A hands-on approach is the only way David will learn.

She doesn't have to whisper nurturing words in Joel's ear, notice his physical reactions, handle them with loving care, match his urging motions and movements with her own, and join him in a sleepy, hushed succession of actions leading them both to the brink of physical fulfillment and beyond.

But she does. And now, neither of them can take those moments back.

....  It was all I could do to hide my shock and surprise.  I didn’t want my poor stepson to think he was a monster!  And how do you hide, as an honest woman, the realization that your own stepson is grossly oversized, his anatomy large enough to frighten any girl who might ever look at him in the future??

And it wasn’t even out of his underpants yet...

I was shaking, my fingers edging closer to Tommy’s protrusion stretching the fabric of his underwear.  I just couldn’t stop mumbling reassurances to him: “It’s okay, Tommy.  I’m your stepmother.  Doctor’s orders.  We must do this.  You’ll feel better.  It’s all going to be okay.  Trust me.  Don’t think about it; just let me handle it.”

My poor boy didn’t know what an anomaly he is.  He didn’t know that he’s equipped like a primal animal or would put any grown man to shame.  He didn’t know he’s unnatural.  And it’s not a mother’s place to make him feel that way.

I reached out and tenderly pressed my fingertips to his massive shaft, trying to maintain a clinical decorum, constantly reminding Tommy that I’m just here to help carry out a medical need.  But I just couldn’t help it...

I hate to think what I must have looked like to my pained stepson.  I was kneeling below him, trying to hide that look of shock on my face, speaking to him as gently and reassuringly as I could, my breasts probably popping right out of my bra and deep neckline in all that sudden stress.

His massive erection (oh, I have no idea how my stepson could be rock hard when he might not even know what sex is!!) looked like it was going to explode all over me at any moment.  I was actually frightened for my own safety.  But you know I couldn’t let Tommy know that!  It must be like what a fireman feels like when he rushes into a burning building to save someone.  You just do what you have to do, knowing that your own life is actually in danger.  With Tommy’s huge dick looming over me, I didn’t want to touch it the wrong way or press it too hard.  His bulbous mushroom head threatened to tear a hole right through his boy-sized underwear.

That’s it, I decided.  If I don’t do this now, I’ll never have the courage.  And my stepson needs me right now.

I first tried one hand grasping his waistband, then two.  I stretched that elastic with all my strength to make it big enough to pull over his giant cock.  I mustered the last of my willpower and decided that my Tommy needed me right then, more than he ever had or may ever in his life.  I had to do what needed to be done... what the doctor said I had to do.

I stretched that fabric over my stepson’s beastly cock and watched it hang there, suspended in the air.  I grabbed it in one hand and started to pull down his shaft... his skin was so hot to the touch, just burning like a raging fire!  I knew the moment was urgent.  The doctor, with all his professionalism, didn’t say what would happen to Tommy if his needs weren’t met immediately from this point forward, but my imagination could picture just how fatal his medical condition must be.

I quickly licked both my palms like a mad woman, wetting them as much as I could while my stepson peered down at me with a look in his eyes that must have been fear.  I’ve never seen him look like that before, maybe only occasionally when I found him pale or oddly quiet when I tried to stretch or bend over a difficult spot in the house to clean and finally asked for his help... 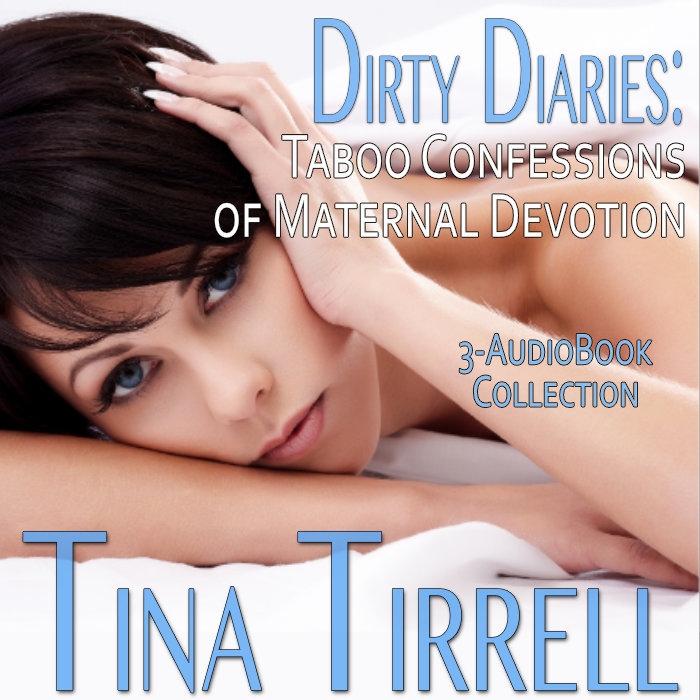 The author (or perhaps Amazon) asks for just a few lines, but I'm not a "few lines" kind of guy. With your indulgence, I'm actually going to *review* this collection of three dirty stories. So here we go:

1) "Whenever His Needs Arise" -- This is the funny one of the trio. A stepmother must deal with a young man's rather convenient medical "problem". Gotta tread carefully with the description here, but let's just say the kid has physical dimensions approximating a horse, and perhaps gobbles a bottle of vitamin E per day with a dozen oysters, washing that down with Spanish Fly. Ms. Tirrell doesn't waste time with details ... though perhaps the real problem is that her (not really) ingenuous stepmother cleans the house in short skirts and high heels and admits in the narration that her bosom is "not designed for housework". The young man's natural "reaction" frightens the lady; she takes him to the doctor. Diagnosis: he's "overdeveloped". Somehow, a solution is found. Meanwhile, I enjoyed the complaint about the absent husband's "god-awful, giant entertainment center taking up half the room". I share Ms. Tirrell's contempt for overpriced and unnecessary electronics encased in pasteboard furniture.

2) "Can I Cuddle Too?" -- The next stepmom in our trio finally enjoys a night alone with her husband. She's gracious enough to model sexy lingerie for her man as a preliminary to the connubial proceedings. But Ms. Tirrell provides a useful warning:
"[Stepmom]: 'Do you like it?'
'I think I love you even more,' [hubby] admitted. He's lucky I didn't take that the wrong way!" -- In other words, curb your enthusiasm for the accoutrements, gents. Anyway, a very well-written and detailed description of marital delight follows. In the aftermath, the creepy stepson, who has clearly been hiding out in the room during the action, suddenly asks, "Can I cuddle too?" Naturally, Stepmom will have to deal with "David" tomorrow. The denouement is delightfully dark and weird.

3) "It's Perfectly Natural" -- The best in the trio. Tirrell's third stepmother is the most serious of the set: at the beginning she wishes she could confess to a priest, but she's too ashamed. The set-up here doesn't go for laughs; it's perfectly realistic: a mother and son watch old movies together -- on a "way-too-big flat screen TV my husband insisted on buying last year". (Clearly a pet peeve of the author.) The husband would've been better off buying his new wife more dinner dresses, because in the story's continuing build-up, Stepmom -- with stepson's help -- can't find an appropriate outfit for an important impending business dinner with hubby. (Men should read women's fiction with microscopic attention; they would learn a few things.) Well, this Stepmom is already dangerously attracted to "Joel"; an electric moment passes between them in the closet. After the dinner, Stepmom goes to sleeping Joel's room to make sure that the electric moment didn't scar him ... or perhaps to pick up where they left off. Ms. Tirrell employs her best prose in this section, which is set in a dark room with moonlight glimmering over their bodies. The emotion is high; the pleasure intense. This third story has as good erotic writing as you'll likely encounter. Bravo to Ms. Tirrell.

Holy hell!  There's a collection of Tina's taboo books, and I've just read it!  I have all three individual books, but I had to have the collection too.  It's the perfect on-the-go bundle for those 'moments' when you need a little extra 'fuel'.  Thank you for including the sexy covers!