Gary adores his girlfriend Jennifer and dotes on every single day he gets to enjoy the pleasures of such a perfect relationship. Their sex life is thriving; their compatibility is through the roof. There's nothing Gary lacks, nothing he'd dream of having or experiencing that he doesn't have already.

Gary only lacks one measly inch—of height, that is. But that teasing endearment too often used by Jennifer stings him with the instant fear of masculine inadequacy. So, Gary takes it upon himself to toy with nature itself. He invests in a male enhancement supplement.

Oh, the successive sessions of heated passion with Jennifer are of the sort neither of them will ever forget, especially after Gary's temporary enlargement devolves into a sudden, undeniable, and very rapid sapping of his height itself.

Gary's shrinking, and there's nothing he or his girlfriend can do about it.

Faced with the sudden, shocking horror of the degenerative results of his impulsive pill-popping, Jennifer and Gary jointly begin to mourn the illustrious, lust-filled relationship they had exalted in just minutes before. Until their close-knit connection and need for comfort and reassurance draw them to touch each other once again.

Gary may be a fraction of his former self, but that doesn't mean his virility has been affected in the least. He may be a palm-sized partner now, but that means there's just more of Jennifer's beautiful body to love. They never could've guessed the sexual possibilities, but they're definitely eager to find out.

Suddenly, feeling small is so seductive.

....  I started to take my time, and buried my face in Jennifer's bountiful bosom.

It was incredible.  I didn't remember ever feeling so much of their fullness before.  They jiggled on either side of my face with every thrust of my cock; my head fit perfectly between them.  I was one happy man.

I shook, just trembled as I collapsed on top of Jennifer, and gushed into her.  She took it all, good sport that she is.

The bedcover was soaked.  I was almost embarrassed. Almost.

I loved the way she stared at my cock as she went on and on about my prowess.

"I mean... I mean... the way your mouth felt on my tits... it was like being fucked in two different ways at the same time!  I don't remember you ever fitting them so perfectly.  I mean... to be able to fuck me like that and reach my tits to bring me to orgasm.  I think I may've had a double orgasm.  I'm not sure what happened!"

We actually ate dinner in bed.  On a Wednesday.  We were like two kids again, exploring each other for the first time and thoroughly exhausting ourselves.

Then, the bomb hit.  When Jennifer straddled me for some cowgirl action.

Oh, how I loved that position: my girlfriend's full naked glory staring back at me as she rode me like a true expert.  But when she leaned down to press her breasts to my chest and meet my mouth with hers, something was wrong.  We just didn't fit.

"I want to kiss you too!  You're sitting weird."

"Didn't you notice my breasts were near your neck instead of your chest?"

Jennifer hopped off of me, my cock sliding out of her oddly easily.

"What!"  My brain wouldn't even register that I couldn't look my girlfriend in the eyes without tilting my head back.

"You're... you're shorter or something."  She slid off the bed and stood up, waiting for me to do the same.

Standing next to Jennifer, a strange, new sense of dire dread began to wash over me. 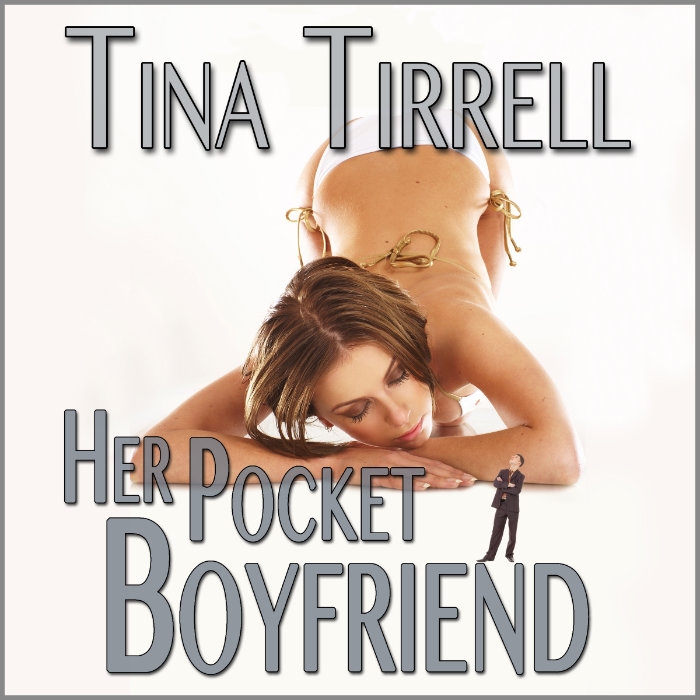 Tina Tirrell returns to giantism, though here it's through the shrinking of the male. Gary and Jennifer are a happy young couple who are as frisky as a pair of hares in rut, barely making it to work on time because they can't stop indulging each other in the morning. During this scene Ms. Tirrell, dependably as always, provides a little insight into successful male-female relations: "It felt so good, but was still indirect enough to keep me teased and undeniably frustrated. Just like she liked me." Indeed, women are never so happy as when we're paralyzed with erotic frustration. As are we: "I loved it when Jennifer bossed me around." Gary and Jennifer have the makings for a successful, lifelong union. :)

All's well at first, they're back at it like hares, and he does seem bigger ... but Gary wants even more, and greed becomes his downfall. Literally.

Ms. Tirrell deftly handles some pretty difficult transformation description. Gary's sudden perspective changes require imaginative details, which Ms. Tirrell aces. Most interesting to me was Ms. Tirrell's foreshadowing and psychological perception. In the early part of the story Gary covers himself in bedsheets like a child, and procrastinates about getting ready for work ... like any child having to go to school. He worries about being an inch shorter than Jennifer, and tries to compensate for his shorter-than-average height by getting a bigger tootsie-roll, at the very least. After things go awry, he discovers another latent wish-come-true in his heart, buried under all the internal fretting about his original shortness: "Suddenly, worries about work, holding a job, earning money, and all the rest just drifted away. They weren't my concern anymore." That, along with being totally cared for by a loving woman, is many a man's secret dream.

Ms. Tirrell provides clues to the female side of the equation, too: "You can be *with* me every second," she tells her transformed boyfriend, "I'll just carry you in my pocket. You'll be with me ALWAYS." A woman's secret dream? Y'all would have to tell me. In my own life, it has felt that way, at times. :)

Simple story but a fun one.

Very ironic situation. Man tries to make more of himself to please his paramour, ends up totally at her mercy.  Sweet, touching story.  Would have liked to have him explore her lady cavern, but the story still delivered in spades!

Tina's adding something all-together new and almost indescribable to the giantess and growth fetishes.  Her writing's addictive.  She's kicking ass and taking names, and we're all going to have more fun reading because of it!

I've found a new fantasy!  I had no idea shrinking could be so sexy, so real, such a turn on!