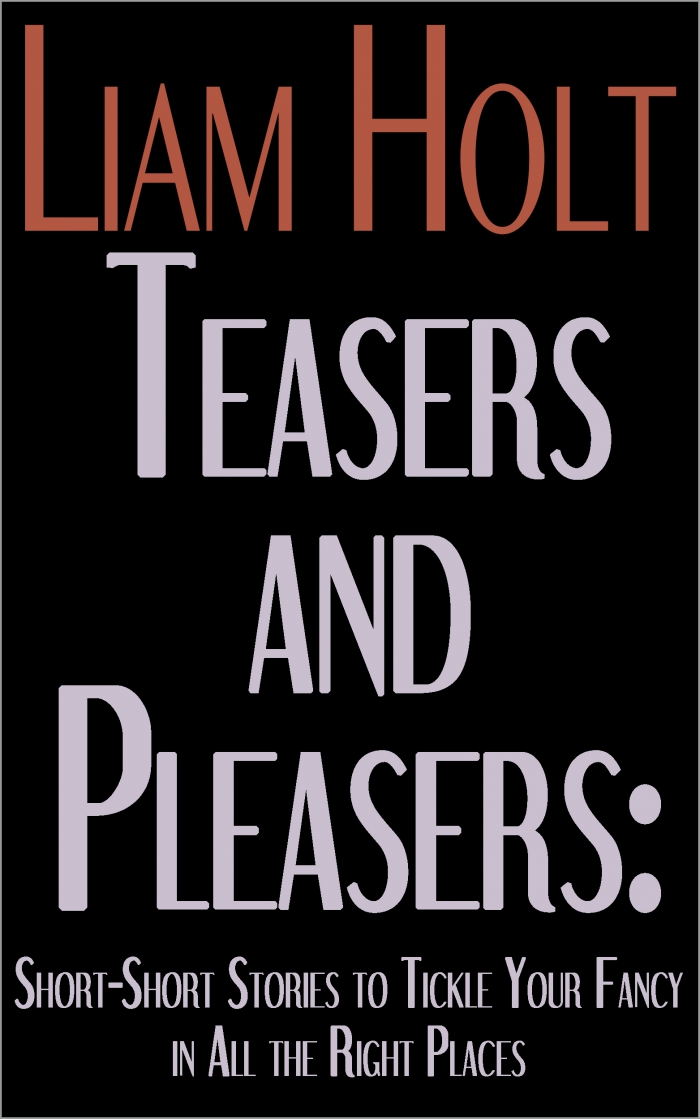 The most delicious delights satiating the most discerning appetites, wrapped up and delivered in bite-sized morsels for a most memorable meal.

The most delicious delights satiating the most discerning appetites, wrapped up and delivered in bite-sized morsels for a most memorable meal.

A woman finds the perfect mix of attraction and acceptance in her ideal companion: The Perfect Lover.

An eager, older husband anticipates the surprise of a lifetime for his wife—and himself when he swallows a Little Blue Pill.

A husband quickly regrets pushing his wife to prove she's not a prude.  Oh, Payback's a Bitch!

An innocent voyeur receives unexpected insight when he enjoys this Lunch with a View.

A tourist experiences a highly recommended local tradition, courtesy of an islander whose reputation definitely precedes her.  She is Tan Tit Ranoa.

A bride-to-be laments her mother-in-law-to-be placed in charge of her bachelorette party until Dinner Is Served.

The movement of the ocean inspires a couple's sensual escapade underwater and delivers a taste of the Salt of the Sea.

From flirting to fruition, the entire Table Dance plays out tableside.

A man has his eye on his neighbor's new wife, the Forbidden Fruit.

Will Delight for Ride is the roadside read scribbled on cardboard, instantly making a business trip all the more interesting.

A dominant woman beckons her submissive companion, seeking the solace of her own Pretty Pet.

Your Perfect Bedside Companion, the Book You Can't Put Down and Won't Stop Thinking About

....  His toes curled and stretched over the plush bathroom rug, showing off their crooked shape, reminding George of yet another of his awkward traits disqualifying him from standing before his wife of forty years as an ideal man.

"George!"  His wife's voice carried up the stairs, through two closed doors, and into the spare bathroom like a charging bull.

"Just be a moment!" George answered at an utterly ineffective volume.

He stared at the small prescription bottle sitting on the counter, reminding himself he'd never be able to escape all his failings, but this one, he was about to resolve.

The seconds ticked by slowly.  George continued to exercise his toes in the rug, then his calves as he lifted himself up on his tiptoes and back down again.  He grew more excited, feeling his blood pumping through his muscles, anticipating his manhood preparing for a much overdue comeback.

His wife's concerned inflection made him cringe, pricking the hairs on the back of his neck, reminding him that his own wife didn't view him as a capable man.  Not when she grew worried about his welfare when he disappeared from her sight for just five minutes.

What could possibly happen to him all alone in the bathroom?  He smiled deviously with a sudden thought.  He looked forward to showing her just what was happening to him in the confines of the small bathroom.  If it would just happen already.

George stared at his crotch, waiting, wishing for a sign of life from down below.

"George, honey, everything all right?"

"Of course, it is!"  His anger surprised himself.

"Please!  Please, just a few moments.  Just wait for me in the den."

She released the doorknob.  "Okay, dear.  Don't be long."

George felt the blood boil in his veins.  He wasn't upset with her; he was upset with it.

He stared.  It hung lifeless and limp.  He paced from wall to wall, trying to encourage the impossible to happen.

George distracted himself with the image of his face in the mirror.  He trimmed his eyebrows.  He picked at the mysterious pimple under his chin that had apparently laid dormant for sixty-five years just to torment him this very moment.  George even plucked the eight wiry, white hairs that decorated the concave space smack in the middle of his chest.  She always hated them.  They were gone.

Then, he felt it.

It wiggled.  It did!  It slowly filled, swelled even, rose slightly, and then rushed forward in a stiff, perpendicular stance.  Proud.  Pompous.  A site to behold.

A great, beaming smile spread across George's face.  He practically sprang from the bathroom, threw open the door, and ran, quite uncomfortably, down the stairs to his waiting wife.

"George..." she managed, her voice quivering.  "Mother's come to visit with us."

George's body drained of all color, his smooth, bare chest glistened at his mother-in-law, his boxer shorts barely concealing the veritable miracle that she certainly wouldn't appreciate.  .... 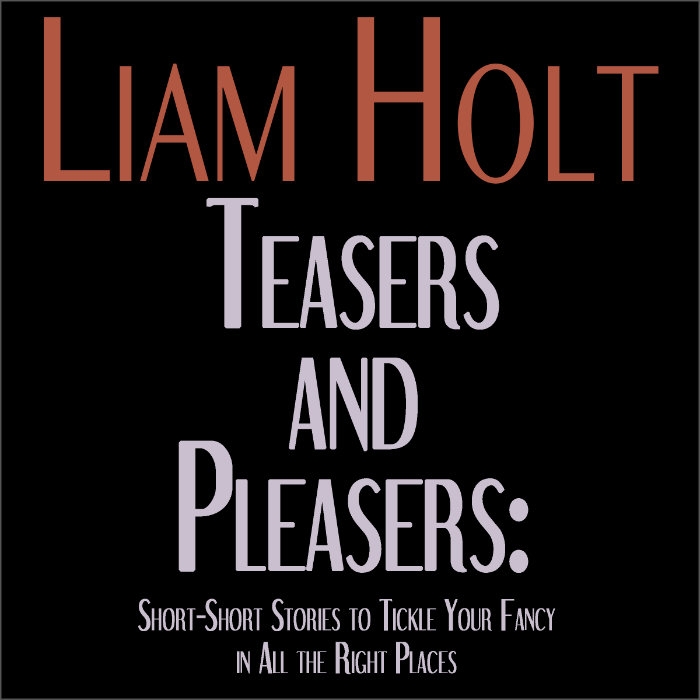 Most of the dozen "flashes" here are like little Twilight Zone episodes within the world of sex: an innocuous set-up, then -- BAM -- the zinger. Think it's easy? Try writing a story from 300 to 1,000 words and do just that. The writer has to wield a sledgehammer in one hand to shatter out the extraneous matter, and wield a scalpel in the other to delicately carve what remains. I'll give a couple of examples of Holt's style, and I'm also going to give a SPOILER ALERT for the next paragraph.

In "Little Blue Pill", an old man in the bathroom takes a Viagra pill. After an agonizing wait for the pill to take effect, he runs downstairs to greet his wife, his johnson poking through his boxers ... only to discover his wife has invited her mother over. In "Lunch with a View", a man who eats lunch at the same outdoor cafe every day, who is "silently hoping to wake himself from his very own life" (dear lord is that feeling ever familiar when you're a lonely middle-aged guy!), and who is in the habit of leering at an attractive woman who also eats at the outdoor cafe every day, gets a surprise when he does his customary peek between the woman's be-skirted legs: written on the panties is the legend: "Say Hello." She's smiling warmly and with intent. His life is about to change. (Lucky, lucky man.) These examples give you an idea of the style in this collection.

End spoiler -- and those are just two examples. Holt describes the absurdities of the sex-drive and where it often drives us. The destinations often turn out to be some pretty hilarious and ironic places. But in a few notable exceptions, they can be lovely, as in "Salt of the Sea", in which a beautiful young couple make love in the teeming waters of the Caribbean. There's "Table Dance", a tale for anyone who remembers what it's like to be so in love with, and so filled with desire for, another that words aren't necessary to express that love and desire. Perhaps the key philosophical note in Holt's fictions is in this sentence from "Will Delight for Ride": "Before the philosophically afflicted driver could begin to question just what type of man he really was, a risk-taker or indecisive fool, he noticed the needle of his speedometer nearing a mere 30 mph. He took that as a sign, and turned his car around."

Live for the moment. Take your chance. Depending on who you are, you will surely get what you deserve.

All right, I'm totally hooked on these little stories Liam calls "flash erotica" now!! I never knew you could tell a story in 500 words or less or even anything under 1,000. They're so fun, so jam-packed with the sexiest details, and each little tale could be a whole novel in itself, and yet, it's a complete story! The one about the old man and his "little blue pill"... oh my gosh!!! (if there's anyone out there in Hollywood reading this, that would make an awesome short film!)

I want more... I want to write some myself... I want to see "flash erotica" take on the genre and take the world by storm. No matter how busy you are, you can make time for these sexy little delights that you can use in your relationships, add to your fantasies, spur on your own stories, and everything else you can think of. These are so cool! Like little bits of candy you can nibble on all day long!

I was surprised to find that Liam does have a knack for the unique and unusual; many of his short stories come as a complete surprise. And I do love being surprised and bowled over by writing... which doesn't happen very often at all. Some of the tales in Teasers & Pleasers are crazy, many of them are funny (some of them laugh-out-loud kind of funny), some are weird, and others can be quite sweet, but by the end of the collection, you've come to love them all. They're the kind of stories that make you think, wonder a bit, and actually want to share them with others. I WOULD actually put this book on my coffee table like the description says... if I had one.

If this is what "literary erotica" is all about, I'm ready to read some more. And I'll definitely be following what else shows up on the shelf by Liam Holt. This man's got a seriously cool mind, and I know he's going to manage to surprise me again. (And Liam, if you ever happen to read this, tell me where you're hiding your non-erotic books if you're writing them. I would love to check out your sci-fi or other fiction too.)

My friend encouraged me to check out 'flash fiction,' these miniature stories all bundled up in sexy small packages. I have to admit, I didn't get it at first, but I've completely fallen for flash erotica and want more! I love all the twists and tingles, the giggles and surprises. I'm making this my coffee table book to surprise my guests with!

I love these tiny stories!  I just can't decide which is my favorite.  I love the way Liam writes about the silly side of sex and about those tiny little sensual details that define eroticism itself.