Clive is smack in the middle of a schoolyard conundrum. His reputation precedes him, even if it is completely inaccurate.

He can't possibly share the truth of what happened that one fateful day in the principal's office, even if he'd be regaled by his classmates as a hero for the sudden replacement of mean, old Principal Parker with a younger, sweeter, sexier version that actually is Principal Parker herself. But when the two prettiest girls in the whole school, twin sisters Heather and Hannah, accuse Clive of being the most terrible thing a boy could ever be called—a girl-hitter—Clive just has to do something about it.

Clive dreads the moment with every fiber of his being, but there's no turning back when he steps into his father's lab once again to retrieve the small, innocent-seeming bottle of little purple pills. He only wants to show the twins what he was caught with that one momentous day, not actually explain it. He only wants to disprove the rumors, not actually repeat the events that started them in the first place.

Still, Clive can't possibly predict the behavior of the twins themselves or guess how far they're willing to go to satiate their own curiosity. When the bottle of magic pills leaves his father's lab and then Clive's own protective hands as well, no one can imagine what will happen next.

But Clive has a pretty good idea. The life-changing experience of getting to know the new Principal Parker is fresh in his mind, and something similarly mind-blowing is bound to happen when the twins get a taste of those little purple pills.

.... He forced himself to watch, knowing there was absolutely nothing he could do to stop what must've already started inside those skinny little twin bodies.

Heather and Hannah ran around in circles, laughing and swinging themselves dizzy until they fell down in a great heap on the ground, all tangled up together.  When Clive couldn't see them move at all, he ran to the sisters to make sure they were okay.

They were okay, but they also weren't.  They were kissing.

"What are you doing!" Clive shouted.

Heather detached her mouth from her sister's and stared up at Clive with her big doe eyes, her long hair spread all around her on the ground and dotted with leaves.  "It tastes good," she said matter-of-factly.

"Do it again," Hannah begged her sister, her eyes never leaving Heather's lips.

Clive was so startled, so confused, that he thought he might be sick.  He was afraid for them, mad at himself, and his own body started to betray him completely unexpectedly.  All at once.

He didn't know why, but he couldn't stop watching as Heather obeyed her sister's wish and nearly slammed her mouth against Hannah's and just started sucking.  "Mmmm..." the girls moaned in unison.

Clive's pants were doing it again.  They were getting tight.  That part of him was doing something weird, getting bigger, growing harder.  He wanted to run and hide, but it was like his shoes were glued to the ground.  He started to like how it felt when the twin sisters moaned each time; he couldn't force himself to stop watching how their lips kept mashing together over and over again.

They did it hard.  They did it soft.  They did it gently.  They did it wetly.  They took turns opening their mouths and swallowing the other's.  They kissed and kissed while their arms stayed wrapped around each other, and it didn't look like they were ever going to stop.

And they were doing something else too.  Their small bodies were pressed up against each other, moving together, kind of pushing at one another's.  The sisters held each other tighter and tighter until they called out, "it feels so good!"

"Hey.  Hey, stop it!"  Clive almost instantly hated himself for saying it.

The sisters separated, just for a few inches, and both looked up at him with glistening, wet lips.  "What?" they asked sweetly.

Clive realized he had no idea what to say next.  In fact, he was losing his ability to think at all.  The pressure in his pants was taking over his mind.

"Wanna try?" Heather asked, still staring up at him with big, sweet eyes.

"What?" the sisters asked.

"I don't know," Clive said, his hands sliding into his pockets in defeat.  His brain stopped working.  Those four eyes staring up at him were doing something to him.  They didn't even blink.

"Chicken," the sisters accused him.

"I... am... not!"  Clive let his weakened knees finally give way as he fell right on top of Heather and planted a big kiss right on her mouth still wet from her own sister's tongue.

Clive glared at Heather in defiance as she stared back at him blankly.

"That's not how you do it," both sisters accused.  And they wrapped their arms around him, pushing his back onto the ground between them.  .... 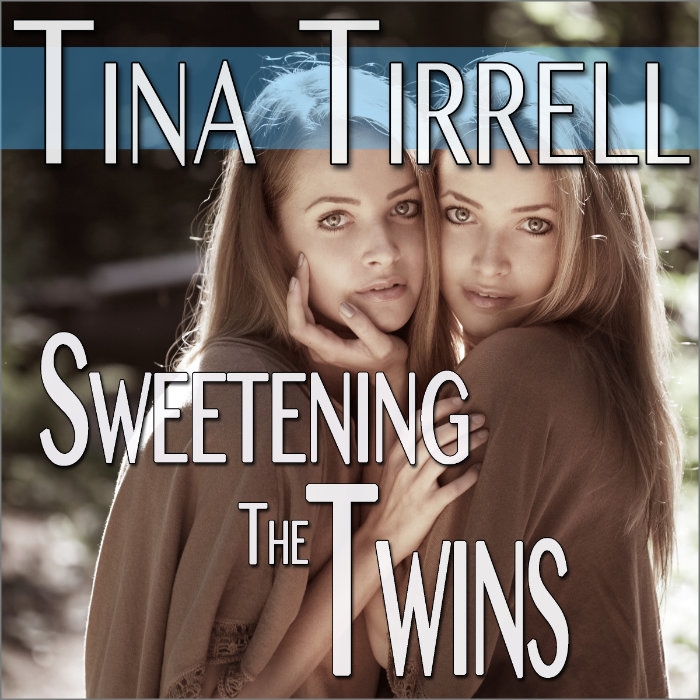 Who ya gonna believe? Someone who has read this book, or someone who hasn't? Who loves ya, baby? Come to Papa.

And after reading this review, do yourself a favor and come to Tina Tirrell's "Sweetening the Twins", Part 2 of her Bimboification series. Having conquered Principal Parker with his dad's magical purple pills, our young hero Clive Murgatroyd (LOL, Tina!) finds himself the hero of the school, receiving attention from the two hottest girls in his grade ... twins. To the victor go the spoils! By the way, I can speak from personal experience about this (well, not transforming old goats into nymphos; rather, it was through my guitar playing at the high school talent show): do something awesome, and the girls come around. That's right, neckbeards: turn off Halo, learn something that requires actual talent and practice, and you too might get some action.

ANYway. Heather and Hannah want the inside scoop on how Clive turned their principal into a Kardashian. Somehow Clive manages to work around his nagging conscience and goes to considerable trouble to steal more pills from his dad's lab. Amazing how enterprising we males are when pride, and quim, is on the line.

Well, the girls snatch the pills from him and run off. They all end up in a field, the twins each swallow a pill, and I won't spoil any more of it, except to say that Ms. Tirrell pulls out all the stops on describing crazed virginal experimentation. It's a very hot scene, one of the writer's hottest -- surprisingly torrid for what has been a mostly humorous series. I can't resist one more personal anecdote, though: like Clive, I was once attacked by two neighborhood girls: they threw me to the ground in one of their backyards and "practiced kissing" on me. "You can learn too," one of them said, giving me the most selfish, wicked grin I've ever seen on a female, and I knew some pretty selfish, wicked females in my adult years, let me say at once.

Wow!  Tina has managed to capture all of my favorite fantasies into one!  I imagine it's every other man's fantasy as well.  I just couldn't wait to come to the climax.