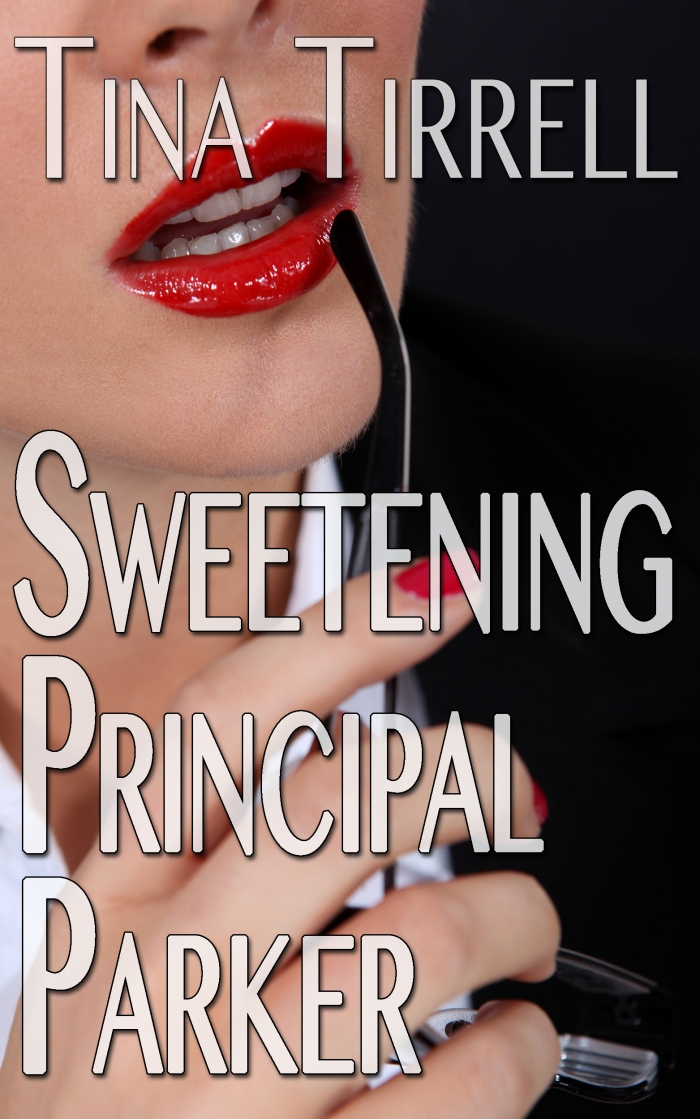 His first trip to the principal's office is one he'll never forget—and one he'll jump at the chance to repeat.

His first trip to the principal's office is one he'll never forget—and one he'll jump at the chance to repeat.

Clive is having a horrible day. Caught "blue-handed" with two little blue tablets in his sweaty palm just before he manages to slip them to his evil classmate and arch enemy Susie Jibbly, Clive is shoved off to the principal's office from where, rumor has it, no student ever returns.

Principal Parker is the scariest kind of woman of all: old, gray-haired, conservative, and in a position of power it's obvious she's inclined to misuse. Clive is prepared for her decision on his ruthless punishment; but when the principal is called out of her office for just a moment, Clive is left alone and realizes his one opportunity to affect the outcome of his dreaded visit to the principal's office. Principal Parker presumed he was caught trying to pass candy to his classmate, but the truth is far worse.

The unassuming little blue pills Clive stole from his father's lab have a chemical effect Clive isn't even aware of, but they drop and dissolve into the principal's coffee mug quite nicely. When Principal Parker returns, Clive watches her sip at her coffee and gradually, completely unexpectedly begin to change with every gulp. It's sweet—she can't resist it—and soon, she can't resist enjoying her newly pert and youthful body and all the urges that come with it. Principal Parker's personality devolves as she transforms into a sexy, girlish plaything treating her student to a private display of her new body... as well as a taste, an intimate demonstration of all the fun it's capable of, and a twice-repeated lesson in what it means to become a man.

....  Clive did what the principal told him to.  And actually felt guilty about it.  He wasn't sure that the beautiful woman sitting on the desk really was Principal Parker.  She kind of looked like her.  At the same time, she wasn't anything like her.

Clive stood there, staring again, his hands stuffed in his pants pockets, half-wondering how he was ever going to get away and half-hoping his time in the principal's office would never end.

"Principal Parker, should I—"

"Call me Jessica," she spoke over him in a seductive voice.

He couldn't help it.  He didn't want to.  He didn't ask it to.  But his private part started to grow.  In the principal's office.  In front of the principal herself.  He suddenly feared punishment like he never had when he first stepped into her office.

But that wasn't all that started to grow.

Principal Parker's breasts, that were quite nice already, as far as Clive could tell, seemed to be plumping up.  They really, truly were.

"What are you looking at?" the principal asked him.

He couldn't speak; he couldn't take his eyes off the soft, white mounds that seemed to be rising in her bra, moving farther up her chest, creating cleavage that was never there before.  And, as they moved, something else seemed to be happening to the principal.  She was enjoying them.

She forgot her question for Clive.  She had both her hands on her own breasts.  And she was squeezing them.  And moaning at them.

Clive couldn't believe his eyes.  It was just like a movie all right.  One of those kinds of movies.  And it was live.  Just for him.

Principal Parker squeezed and lifted, like she was weighing them in her palms.  Up and down, up and down.  Her fingers squeezed and felt, cupped and jiggled.  Then, she removed her hands and looked at Clive.

His mouth was still hanging open.  His pants were terribly uncomfortable.  What was stuffed inside them seemed way too big, impossibly hard, and aching.

Principal Parker looked down at her own chest again, at her own massive, newly developed breasts bubbling out of her bra, and reached one hand inside one of her bra cups.  She lifted her breast out, stared at it, then pinched the pink nipple at the end of it.

She pinched again, and it grew too.  She pinched some more, and it turned bright red.  Then, she lifted it to her lips of the same color and stuffed that nipple right into her own mouth.

Inside his pocket, Clive's hand pushed against that terribly hard ache, trying to make it feel better.  But pushing on it only made it ache more.  And want more.

Principal Parker sucked on her breast, teased her nipple with her tongue, blew on it a bit, then licked at it again.  That nipple looked as hard as Clive felt.  His school principal seemed to forget that anyone else was in the room. 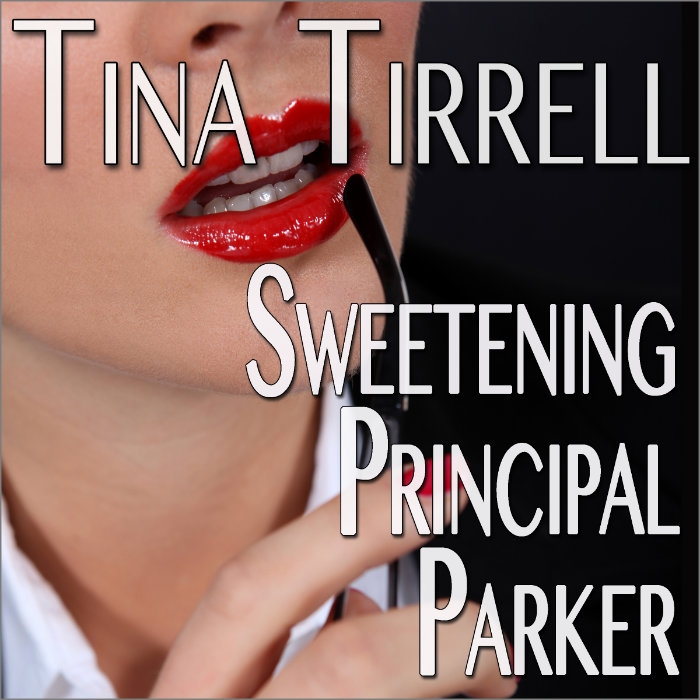 Not totally sure about this one.
Okay it is a hot story.
But the idea of the old principal turning into something so sexy creeps me out a little.

Volume 1 of Tina Tirrell’s Bimbofication series. We meet young Clive, not yet the world-weary little sad-sack stud he would become in later entries, sitting scared in the principal’s office. Caught trying to pass “candy” to a tormenting brat, he must face punishment from an old crone. Well, one pill makes you larger, one pill makes you small, and the ones that Clive slips in your coffee turns you into an age-regressed nymphomaniac … Go Ask Ms. Parker.

I’m always surprised by Ms. Tirrell’s versatility. The beginning of her story, including the very prose style, has a once-upon-a-time feel, like a fairy-tale: the put-upon innocent, the scary grandmother-figure, and, of course, magic that causes transformation. If this sounds familiar, it is: Ms. Tirrell’s story is a direct descendant of Perrault’s “Cinderella”. As literary critic Harold Bloom has pointed out, writers, whether consciously or not, cannot escape the influence of the centuries that came before.

Ms. Tirrell, having established her literary bona fides, proceeds to write a sex scene that is hotter than Cara Delevingne in a bikini while drinking a sex-on-the-beach at Burning Man. :). She hits all the major notes: ageplay, desk-action, someone else trying to get in the room … perfect.

I was first introduced to this series with 'Sweetening the Substitute'. In that story, I loved the playful take on the teacher fantasy and really enjoyed that the bimbofication doesn't come off as degrading but fun for all involved. Also, Tina's attention to detail is superb for building the mental image of surroundings and the people. It reminded me of the school days.

This novel sets up the beginning of Clive's journey to manhood, whether he knows it or not. This story doesn't get heavy handed with exposition to explain how the miraculous (or is it dangerous?) pill came into being and instead focuses on putting the reader right into the situation with Clive sitting in Principal Parker's office. While the story is in the third-person, Tina did an excellent job with keeping the POV with Clive so that as the reader, we are experiencing things through his perspective and knowledge. This also includes using diction more appropriate to a school boy on the verge of his sexual awakening than a fully realized master. It was fun to read Clive's description of Principal Parker both before and after her change and how it brought about a change in Clive. The changes lead to acts that are both steamy and sweet thanks to Tina's grasp of what erotic readers want and of the youthful innocence of Clive and the new transformed Principal Parker.

The end of the story ends on a high note with an open ending for Clive to head off to the next hot encounter. Overall, I would say that Principal Parker was a very successful, and pleasurable first experiment, and I look forward to the results of the follow up experiments that Clive, and Tina, deliver.

This was another scintillating tale from Tina that focused on a transformation fantasy this time. From my past experience, a not-so detailed change would precede the main story. However, Tina managed to selectively note the changes happening to Principal Parker in detail without taking too much away from Clive's quandary.  Also, Clive did show signs of personal growth in a short tale, leading to some 'extra credit' with the principal, so another indication that Tina can capture the reader with an everyday scenario, then lead the reader to an intensely deep erotic side that few know how to do. I'm impressed with what Tina Tirrell can do with a pen and paper.

This is the first book I read of Tina I will be reading more it keep me thinking at what going to happen is it all over or is it just getting started.  Highly Highly recomend I will be buying more soon.

Detail of her pleasing him was nicely done. What I especially enjoyed was the change mentally didn't feel rushed. Many stories of this transformation type go to double digit IQ far too quickly, so kudos there! My only personal nitpick would have been to have seen more detail of her bosoms swelling, but overall a nice taste of transformation, hope to see more of it in the future.

As a huge Tina Tirrell fan, I couldn't help trying other 'fetishes' she's written about, even if they weren't really 'my thing.'  And boy, am I glad I did!  Sweetening Principal Parker is the proof in the pudding.  Tina Tirrell can write anything well and so HOT.

I'd never read any erotica in the 'transformation fantasy' theme before... and I love it!  It's like being a kid again, falling for fantasy and sci-fi 'magic,' but with a very adult twist I'm now not going to be able to get enough of!